All Prophetic Manifestations ‘Revealed to the Least’ 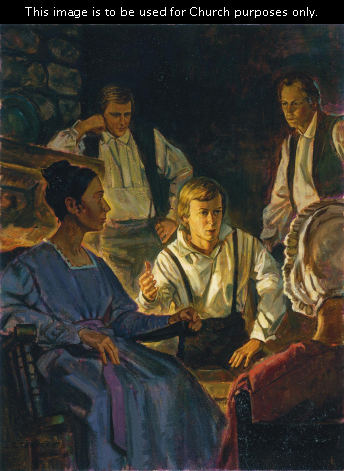 17 And it came to pass after I, Nephi, having heard all the words of my father, concerning the things which he saw in a vision, and also the things which he spake by the power of the Holy Ghost, which power he received by faith on the Son of God—and the Son of God was the Messiah who should come—I, Nephi, was desirous also that I might see, and hear, and know of these things, by the power of the Holy Ghost, which is the gift of God unto all those who diligently seek him, as well in times of old as in the time that he should manifest himself unto the children of men.

18 For he is the same yesterday, today, and forever; and the way is prepared for all men from the foundation of the world, if it so be that they repent and come unto him.

History of the Church, 5:529–30; paragraph divisions altered; from a discourse given by Joseph Smith on Aug. 13, 1843, in Nauvoo, Illinois; reported by Willard Richards.

“God hath not revealed anything to Joseph, but what He will make known unto the Twelve, and even the least Saint may know all things as fast as he is able to bear them, for the day must come when no man need say to his neighbor, Know ye the Lord; for all shall know Him … from the least to the greatest [see Jeremiah 31:34].”

History of the Church, 3:380; from a discourse given by Joseph Smith on June 27, 1839, in Commerce, Illinois; reported by Willard Richards.

… Mormonism is truth, in other words the doctrine of the Latter-day Saints, is truth. … The first and fundamental principle of our holy religion is, that we believe that we have a right to embrace all, and every item of truth, without limitation or without being circumscribed or prohibited by the creeds or superstitious notions of men, or by the dominations of one another, when that truth is clearly demonstrated to our minds, and we have the highest degree of evidence of the same.”

“The great thing for us to know is to comprehend what God did institute before the foundation of the world. Who knows it? It is the constitutional disposition of mankind to set up stakes and set bounds to the works and ways of the Almighty. … That which hath been hid from before the foundation of the world is revealed to babes and sucklings in the last days [see D&C 128:18].”

17
Living Prophets
18
Personal Revelation for Everyone
19
All Prophetic Manifestations ‘Revealed to the Least’
20
The Light of Christ – Available to All Men
21
Every Soul . . . shall see my face
22
When We See Him His Face Will Be Familiar
23
Urim and Thummin – Things of High Order Made Known