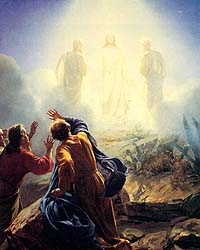 Encylopedia of Mormonism – Transfiguration – a

Transfiguration for mortals consists of a temporary physical and spiritual change, allowing them not only to behold the glory of God but to enter his presence. It is characterized by illumination of countenance such as Moses experienced (Moses 1:11; Ex. 34:29-35) and comes about by an infusion of God's power (MD, p. 725). Because God is a being of transcendent glory, it is impossible for men and women to enter his presence without their physical bodies being spiritually "quickened." The Prophet Joseph Smith explained that God "dwells in eternal fire; flesh and blood cannot go there, for all corruption is devoured by the fire. "Our God is a consuming fire"' (TPJS, p. 367; cf. Heb. 12:29; Deut. 4:24). Transfiguration bestows on individuals a temporary condition compatible to that of deity and allows them to see God face-to-face.

Modern revelation says that "no man has seen God at any time in the flesh, except quickened by the Spirit of God" (D&C 67:11). Soon after Moses' call, for example, he was transfigured so that he could withstand God's power; he later wrote: "His glory was upon me; and I beheld his face, for I was transfigured before him" (Moses 1:11). After God's spirit withdrew, Moses returned to his normal mortal condition and testified that he had beheld God with his own eyes, not however with his natural but with his spiritual or transfigured eyes. He explained that his "natural eyes could not have beheld; for I should have withered and died in [God's] presence" (Moses 1:10-11).

From time to time, other worthy persons have been transfigured. Jesus was transfigured before Peter, James, and John on the Mount of Transfiguration so that "his face did shine as the sun, and his raiment was white as the light" (Matt. 17:2). On the same occasion, the apostles were similarly changed, enabling them to remain in his transfigured presence (TPJS, p. 158). At the opening of the present dispensation, Joseph Smith was spiritually quickened so that he could see both God the Father and his Son Jesus Christ and receive instruction from them. After seeing a transcendent brilliance descend upon him, the Prophet wrote: "When the light rested upon me I saw two Personages, whose brightness and glory defy all description, standing above me in the air" (JS-H 1:16-17). When the vision of the three degrees of glory was received, he and Sidney Rigdon were "in the Spirit," with the result that they "were enlightened, so as to see and understand the things of God" (D&C 76:11-12, 113-119; cf. D&C 110:1-4).

Transfiguration should not be confused with translation of the body, though both possibly affect the body in similar ways. Transfiguration describes a momentary change, whereas translated beings experience a long-term change that ends only when they pass from mortality to immortality (3 Ne. 28:8). Among those translated are Enoch and the city Zion (Moses 7:18-23, 27; MD, p. 727), Elijah, the apostle John (D&C 7), and the three Nephite disciples (3 Ne. 28:4-11, 15-40).

The earth itself will be transfigured at Christ's second coming. While on the Mount of Transfiguration the three apostles saw not only God's divine glory but also the earth in its transfigured state (cf. D&C 63:21; TPJS, p. 13). Modern revelation says that, through obedience and enduring to the end, faithful Saints will receive an inheritance upon the transformed earth when the millennial day arrives (D&C 63:20-21).