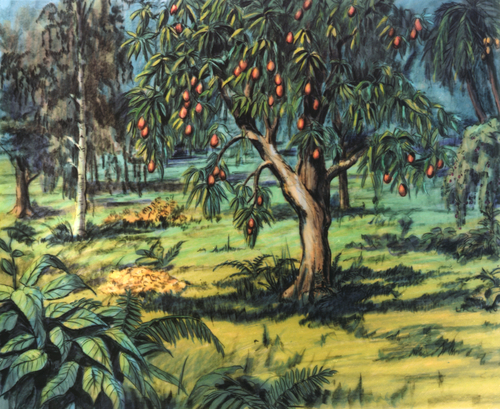 1  SPRING Hill is named by the Lord Adam-ondi-Ahman, because, said he, it is the place where Adam shall come to visit his people, or the Ancient of Days shall sit, as spoken of by Daniel the prophet.

Adam-ondi-Ahman, a settlement in Daviess County, Missouri, received its unusual name from the Prophet Joseph Smith in 1838 when Latter-day Saints were moving into the area. Members of the Church had been forced out of Jackson County, Missouri, in 1833 after three years of temporary asylum, and were subsequently asked to leave Clay County. When they appealed to the state legislature to make a new county "for Mormons," Caldwell and Daviess counties were organized. The Saints immediately moved into Caldwell County with Far West as the county seat, and soon also began settling in adjoining Daviess County. In May 1838 Joseph Smith led surveyors to a horseshoe bend of the Grand River, seventy miles north of present-day Kansas City, and proclaimed a new community, which he named Adam-ondi-Ahman because, said he, "it is the place where Adam shall come to visit his people, or the Ancient of Days shall sit, as spoken of by Daniel the Prophet" (HC 3:35; D&C 116). Orson Pratt interpreted the name to mean "Valley of God, where Adam dwelt" (JD 18:343).

The Prophet's revelations indicated several things about the area: (1) the Garden of Eden was located in Jackson County, Missouri, and after Adam was expelled from the garden, he went north to Adam-ondi-Ahman; (2) three years before Adam's death, he gathered the righteous of his posterity to Adam-ondi-Ahman and bestowed upon them his last blessing; (3) this site would be the location of a future meeting of the Lord with Adam and the Saints, as spoken of by the prophet Daniel (Dan. 7:9-14, 21-27;12:1-3).

123
Miracles Have Not Ceased – Even Greater
124
A Bright, Hopeful and Optimistic Future . . .
125
Every Mystery to be Revealed
126
No ‘Fear’ of Second Coming Events
127
New Jerusalem in America
128
Garden of Eden, Adam ondi Ahman – Missouri