The Role of Angels 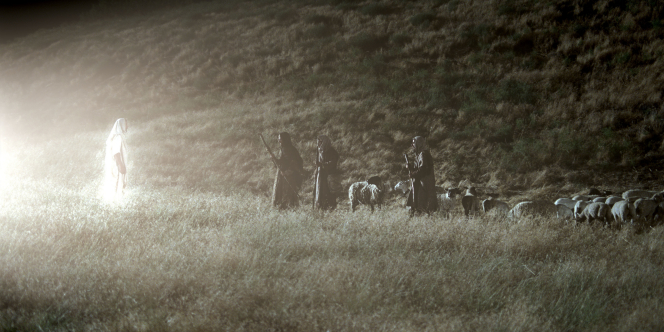 29 And because he hath done this, my beloved brethren, have miracles ceased? Behold I say unto you, Nay; neither have angels ceased to minister unto the children of men.

30 For behold, they are subject unto him, to minister according to the word of his command, showing themselves unto them of strong faith and a firm mind in every form of godliness.

31 And the office of their ministry is to call men unto repentance, and to fulfil and to do the work of the covenants of the Father, which he hath made unto the children of men, to prepare the way among the children of men, by declaring the word of Christ unto the chosen vessels of the Lord, that they may bear testimony of him.

32 And by so doing, the Lord God prepareth the way that the residue of men may have faith in Christ, that the Holy Ghost may have place in their hearts, according to the power thereof; and after this manner bringeth to pass the Father, the covenants which he hath made unto the children of men.

Latter-day Saints accept the reality of angels as messengers for the Lord. Angels are mentioned in the Old and New Testaments, the Book of Mormon, the Doctrine and Covenants, and the Pearl of Great Price and are prominent in the early history of The Church of Jesus Christ of Latter-day Saints. Angels are of various types and perform a variety of functions to implement the work of the Lord on the earth.

The skepticism of the modern age has tended to diminish belief in angels. However, Jesus Christ frequently spoke of angels, both literally and figuratively. When Jesus' disciples asked him to "declare unto us the parable of the tares of the field," he responded, "He that soweth the good seed is the Son of Man; the field is the world…and the reapers are the angels" (Matt. 13:36-39). Angels are actual beings participating in many incidents related in scripture (e.g., Luke 1:13, 19;2:25; John 20:12,etc.). They exist as a part of the "whole family in heaven" (Eph. 3:15). All people, including angels, are the offspring of God.

In form angels are like human beings. They do not, of course, have the wings many artists symbolically show (TPJS, p. 162). Concerning the two angels who visited Lot's home in Sodom, the local residents inquired, "Where are the men which came in to thee this night?" (Gen. 19:1, 5,emphasis added). Daniel described the angel Gabriel as having "the appearance of a man" (Dan. 8:15). At the sepulcher of the risen Savior "the angel of the Lord descended from heaven" (Matt. 28:2) as "a young man…clothed in a long white garment" (Mark 16:5). A quite detailed description of an angel was given by Joseph Smith in recording the visit of the angel Moroni (JS-H 1:30-33, 43).

There are several types and kinds of beings, in various stages of progression, whom the Lord has used as angels in varying circumstances. One kind is a spirit child of the Eternal Father who has not yet been born on the earth but is intended for earthly mortality. Such is probably the type of angel who appeared to Adam (Moses 5:6-8).

Another kind of angel may be an individual who completed his mortal existence but whose labors continue in the spirit world while he awaits the resurrection of the body. Such are referred to as "the spirits of just men made perfect" (Heb. 12:22-23; D&C 76:69; TPJS, p. 325). "Are they not all ministering spirits, sent forth to minister for them who shall be heirs of salvation?" (Heb. 1:13-14).

Since the resurrection of Jesus Christ, some angels have been "resurrected personages, having bodies of flesh and bones" (D&C 129:1). The Prophet Joseph Smith indicated that resurrected angels have advanced further in light and glory than spirits (TPJS, p. 325). Such are the beings who have been instrumental in the restoration of the gospel in the dispensation of the fulness of times. It was of this type of angel that John wrote, "And I saw another angel fly in the midst of heaven, having the everlasting gospel to preach unto them that dwell on the earth, and to every nation, and kindred, and tongue, and people" (Rev. 14:6). Elias, Moses, Elijah, Moroni, John the Baptist, Peter, and James are examples of resurrected angels who ministered to the Prophet Joseph Smith.

Pursuant to John's prophecy in Revelation 14:6,the fulness of the gospel, in word and power, has been restored to the earth through the ministration of angels. The angel Moroni, a resurrected being, revealed the record of the Book of Mormon which contains the fulness of the gospel of Jesus Christ (D&C 20:8-11; see Moroni, Visitations of). Later he who was called John the Baptist in the New Testament, now also a resurrected being, came as an angel and restored the Aaronic Priesthood to Joseph Smith and Oliver Cowdery on May 15, 1829 (D&C 13; JS-H 1:68-72; see Aaronic Priesthood: Restoration). Likewise, Peter, James, and John, as angelic embodied messengers from God, restored the Melchizedek Priesthood (D&C 27:12-13; see Melchizedek Priesthood: Restoration of Melchizedek Priesthood). Moses, Elias, and Elijah each appeared as angels and committed once again the "keys of the gathering of Israel," the "dispensation of the gospel of Abraham" (including celestial or patriarchal marriage), and the keys of the sealing powers to "turn the hearts of the fathers to the children, and the children to the fathers" (D&C 110:11-16).

Angelic messengers bring knowledge, priesthood, comfort, and assurances from God to mortals. However, when priesthood or keys are to be conveyed, the ministering angel possesses a body of flesh and bones, either from resurrection or translation. Spirits can convey information, but they cannot confer priesthood upon mortal beings, because spirits do not lay hands on mortals (cf. D&C 129).

A different usage of the term "angel" is applied to those who, because they have not obeyed the principles of the new and everlasting covenant of marriage, do not qualify for exaltation but remain separately and singly as ministering angels without exaltation in their saved condition for all eternity (D&C 132:16-17).