The Lord led the pilgrims to the Plymouth Rock 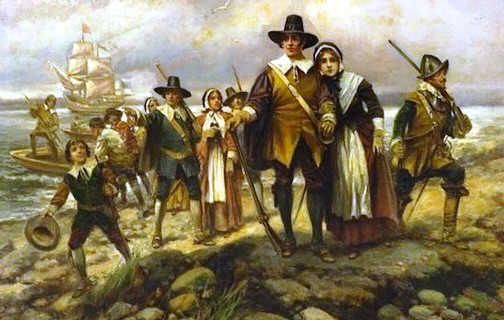 The Book of Mormon

13 And it came to pass that I beheld the Spirit of God, that it wrought upon other Gentiles; and they went forth out of captivity, upon the many waters.

14 And it came to pass that I beheld many amultitudes of the Gentiles upon the bland of promise; and I beheld the wrath of God, that it was upon the seed of my brethren; and they were cscattered before the Gentiles and were smitten.

15 And I beheld the Spirit of the Lord, that it was upon the Gentiles, and they did prosper and aobtain the bland for their inheritance; and I beheld that they were white, and exceedingly fair and cbeautiful, like unto my people before they were dslain.

16 And it came to pass that I, Nephi, beheld that the Gentiles who had gone forth out of captivity did humble themselves before the Lord; and the power of the Lord was awith them.

As I prepared to address you, I thought how looking for the Lord’s hand in the early

history of the United States might help us recognize His hand in our own lives, no matter when

or what country we call home.

About 2,600 years ago, the Book of Mormon prophet Nephi recorded a remarkable vision

in which he saw the Savior’s birth, ministry, death, and resurrection. As the vision continued,

Our present civilization is no exception. We who live in America are under this everlasting decree. And the Lord has said, “My word shall be verified at this time as it hath hitherto been verified” (D&C 5:20). Jesus Christ, the God of this land, led Columbus to it. He led the Pilgrims to Plymouth. He sustained and gave victory to the colonists. He established the Constitution of the United States (see D&C 101:80). Over a period of some twenty-six centuries he directed the writing of the Book of Mormon, which contains the record of the former inhabitants of this land. At his command, Moroni finished the record and hid it up in the Hill Cumorah, where, under his surveillance, it was safely preserved for some fourteen hundred years.