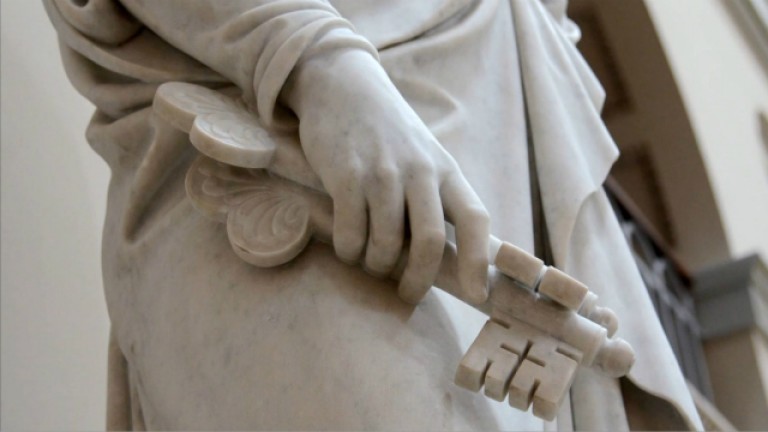 Encyclopedia of Mormonism – Keys of the Priesthood

The keys of the priesthood refer to the right to exercise power in the name of Jesus Christ or to preside over a priesthood function, quorum, or organizational division of the Church. Keys are necessary to maintain order and to see that the functions of the Church are performed in the proper time, place, and manner. They are given by the laying on of hands in an ordination or setting apart by a person who presides and who holds the appropriate keys at a higher level. Many keys were restored to men on earth by heavenly messengers to the Prophet Joseph Smith and Oliver Cowdery.

The keys of the kingdom of God on earth are held by the apostles. The president of the church, who is the senior apostle, holds all the keys presently on earth and presides over all the organizational and ordinance work of the Church (D&C 107:8-9, 91-92). He delegates authority by giving the keys of specific offices to others (D&C 124:123). Only presiding priesthood officers (including General Authorities, stake presidents, mission presidents, temple presidents, bishops, branch presidents, and quorum presidents) hold keys pertaining to their respective offices. Latter-day Saints distinguish between holding the priesthood and holding keys to direct the work of the priesthood: one does not receive additional priesthood when one is given keys (Joseph F. Smith, IE 4 [Jan. 1901]:230).

The Prophet Joseph Smith taught that "the fundamental principles, government, and doctrine of the Church are vested in the keys of the kingdom" (TPJS, p. 21). "The keys have to be brought from heaven whenever the Gospel is sent"; they are revealed to man under the authority of Adam, for he was the first to be given them when he was given dominion over all things. They have come down through the dispensations of the gospel to prophets, including Noah, Abraham, Moses, Elijah; to Peter, James, and John; and to Joseph Smith and the designated prophets of the latter days (HC 3:385-87). Keys to perform or preside over various priesthood functions were bestowed upon Joseph Smith and Oliver Cowdery by John the Baptist (see Aaronic Priesthood: Restoration), by Peter, James, and John (see Melchizedek Priesthood: Restoration of Melchizedek Priesthood), and by Moses, Elias, and Elijah in the Kirtland Temple (see Doctrine and Covenants: Sections 109-110).