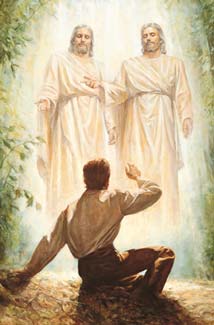 Latter-day Saints do believe that Jesus Christ was literally the Son of God, not the son of Joseph or even the son of the Holy Ghost. (see 2 Ne 25:12 and DC 93:11) As Ezra Taft Benson stated,

[T]he testimonies of appointed witnesses leave no question as to the paternity of Jesus Christ. God was the Father of His fleshly tabernacle, and Mary, a mortal woman, was His mother. He is therefore the only person born who rightfully deserves the title “the Only Begotten Son of God.”

Ezra Taft Benson, "Five Marks of the Divinity of Jesus Christ," From a fireside address given at the University of Utah Special Events Center on 9 December 1979.

Dr. Stephen H. Webb, a Catholic professor who, when most of the world refused to view Mormons as Christians, publicly defended them, saying, "Mormons are more Christian than many mainstream Christians who do not take seriously the astounding claim that Jesus is the Son of God."