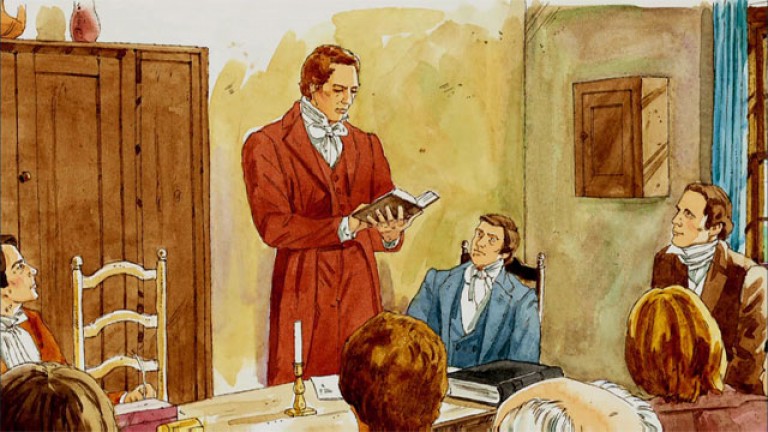 Doctrine and Covenants 89 – The Word of Wisdom

Word of Wisdom – Encyclopedia of Mormonism

Word of Wisdom is the common title for a revelation that counsels Latter-day Saints on maintaining good health and is published as Doctrine and Covenants: section 89.The practice of abstaining from all forms of alcohol, tobacco, coffee, and tea, which may outwardly distinguish active Latter-day Saints more than any other practice, derives from this revelation.

Called "a Word of Wisdom" in the introduction, the revelation was given to Joseph Smith at Kirtland, Ohio, on February 27, 1833, when the School of the Prophets was meeting at his home in the Whitney Store. It came in response to the Prophet's inquiry about tobacco, which was being used by some of the men attending the school. The revelation states that it is specifically for the latter days because of "evils and designs which do and will exist in the hearts of conspiring men" (D&C 89:4). The Word of Wisdom limited alcohol use to wine for the Sacrament and hard liquor for washing the body. It noted tobacco as useful only for treating bruises and sick cattle. Hot drinks (later defined as coffee and tea) were not for "the body or belly" (D&C 89:9). Additional advice was given permitting the use of meat, but suggesting that it be restricted to winter or times of famine (D&C 89:12-13). The revelation places strong emphasis on the use of grains, particularly wheat, as the staple of the human diet (D&C 89:14, 16-17), and upon fruits and vegetables ("herbs" verse 11; cf. 59:17-18) in season. The Word of Wisdom also states that some "herbs" are present on the earth for the healing of human ailments (D&C 89:8-11). Church members should not consume alcohol, tobacco, tea, or coffee and should use moderation in eating other foods.

Those who follow this counsel and keep the other commandments of God are promised that they will have "health in their navel and marrow to their bones," "shall run and not be weary, and shall walk and not faint," "shall find wisdom and great treasures of knowledge, even hidden treasures," and "the destroying angel shall pass by them…and not slay them" (D&C 89:18-21; cf. Dan. 1:3-20;2:19-30).

The promises associated with the Word of Wisdom are considered both temporal and spiritual. The temporal promise has been interpreted as better health, and the spiritual promise as a closer relationship to God. These promises reflect the concern of the Church with both the temporal and spiritual Welfare of its members. They also reflect God's concern with the condition of the physical body of every person, paralleling aspects of other religious health codes defining types of foods forbidden for health and spiritual reasons.

President Gordon B. Hinckley, Ensign, November 1997, Look to the Future

We have a running start on the world, a code so simple and easily understood. Not long ago I met Dr. James E. Enstrom of the University of California at Los Angeles. He is not a member of the Church. He speaks with complete objectivity. His studies indicate that actuarially speaking, Latter-day Saints live about 10 years longer than their peers.

Who can set a price on 10 years of life? What a remarkable and wonderful blessing is this Word of Wisdom.