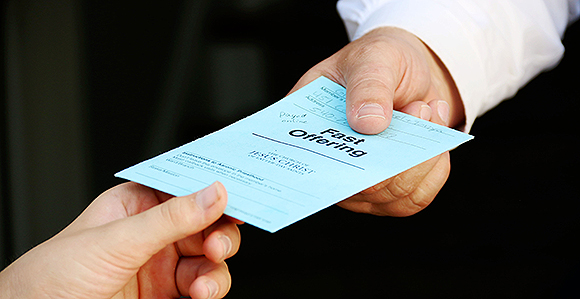 The first Sunday of each month is designated as a Fast Sunday, and Latter-day Saints are asked to fast for twenty-four hours and donate at least the value of the meals not eaten as fast offerings. Fast offerings are cash or in-kind donations given to the bishop to help the needy following a short period of fasting.

The concept of fast offerings appears as early as the time of Isaiah, who encouraged people to fast and "deal thy bread to the hungry" and to "bring the poor that are cast out to thy house" when fasting (Isa. 58:7). Fasting was also practiced in the postapostolic Church, in which several early Christian fathers advised that "to help the poor with the food saved, fasting is a good work" (Kittel, Vol. 4, p. 934). By the mid-second century some churches held twice-weekly voluntary fasts, and leaders collected funds for the poor following weekly worship services (Swenson, pp. 373-78).

The Prophet Joseph Smith, instituted the practice of collecting fast offerings for the poor in Kirtland, Ohio (JD 12:115), where Church members had begun gathering in the early 1830s. Later, on May 17, 1845, in Nauvoo, Illinois, the Quorum of the Twelve Apostles sent a general letter to the Church defining "the principles of fasts," stating: Let this be an example to all saints, and there will never be any lack for bread: When the poor are starving, let those who have, fast one day and give what they otherwise would have eaten to the bishops for the poor, and everyone will abound for a long time; and this is one great and important principle of fasts approved of the Lord. And so long as the saints will all live to this principle with glad hearts and cheerful countenances they will always have an abundance [HC 7:413].

During the exodus from Nauvoo the pioneers seldom observed a common fast day but often were asked to give to the poor. It appears that the giving of regular fast day donations was reinstituted in the Salt Lake Valley during the drought of 1855-1856. Of that period George A. Smith wrote: In all these times of scarcity…measures were taken to supply those who were unable to furnish themselves. A fast day was proclaimed for the church on the first Thursday of each month, and the food saved in that way distributed among the poor; and thousands of persons, who had abundance of bread put their families on rations, in order to save the same for those who could not otherwise obtain it [CHC 4:109-110].

Since that time, the observation of a monthly fast of two meals on the first Sunday of each month and the donation of fast offerings have become regular practices in the Church. In the pioneer economy most donations-both tithing and fast offerings-were of food or livestock, and members took donations to the local tithing office or bishop's storehouse. The goods were then distributed to the needy. Today, fast offerings usually consist of cash. Aaronic Priesthood deacons often serve as agents of the bishop in collecting fast donations.

Wards and stakes are encouraged to be self-reliant in caring for their poor. Bishops are instructed to seek out those in need and to provide them with life's essentials. Surplus fast offering funds in stakes are forwarded to Church headquarters, where they are redistributed to areas of greatest need.

Special fasts are occasionally proclaimed by the First Presidency when urgent needs arise. Such was the case on May 15, 1845, when "enough was contributed to supply the wants of the poor until harvest" (HC 7:411). In 1985, Church members observed two special fast days and donated $10,465,000 to hunger relief and community development projects in Africa, South America, and elsewhere (see Humanitarian Service).

Historically, fast offerings have seldom been sufficient to provide for all the welfare needs of the Church, and shortages have been met from general Church funds. The counsel of Church President Spencer W. Kimball remains in effect: "I think that when we are affluent, as many of us are, that we ought to be very, very generous…. I think we should…give, instead of the amount we saved by our two meals of fasting, perhaps much, much more-ten times more where we are in a position to do it" (CR [Apr. 1974], p. 184).