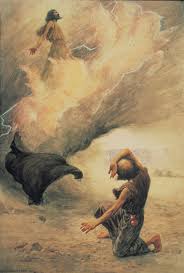 Latter-day Saint scriptures speak of a unique class of beings, persons whom the Lord has "translated" or changed from a mortal state to one in which they are temporarily not subject to death, and in which they experience neither pain nor sorrow except for the sins of the world. Such beings appear to have much greater power than mortals. All translated beings will eventually experience physical death and resurrection (MD, p. 807-808). Translation is a necessary condition in special instances to further the work of the Lord.

After the Flood, others were also translated. In his inspired rendition of the Bible, Joseph Smith tells of many who "were translated and taken up into heaven" (JST Gen. 14:32-34). Fewer translations apparently occurred in the New Testament era, though John the beloved (John 21:20-23; D&C 7) and the three Nephites were translated (3 Ne. 28).

Translated beings are assigned special ministries, some to remain among mortals, as seems to be the case of John and the Three Nephites, or for other purposes, as in the case of Moses and Elijah, who were translated in order to appear with physical bodies hundreds of years later on the mount oftransfiguration prior to the resurrection of Christ. Had they been spirits only, they could not have laid hands on the mortal Peter, James, and John (cf. D&C 129:3-8). Why those of Enoch's city were translated, we are not specifically informed, although the Prophet Joseph Smith explained the role of translated beings thus: "Many have supposed that the doctrine of translation was a doctrine whereby men were taken immediately into the presence of God, and into an eternal fullness, but this is a mistaken idea. Their place of habitation is that of the terrestrial order, and a place prepared for such characters He held in reserve to be ministering angels unto many planets, and who as yet have not entered into so great a fullness as those who are resurrected from the dead" (TPJS, p. 170).

The scriptures do not define differences between transfiguration and translation, but it appears that transfiguration is more temporary, as in Matthew 17:1-9 andMoses 1:11, occurring primarily to permit one to behold spiritual things not possible in the mortal condition.