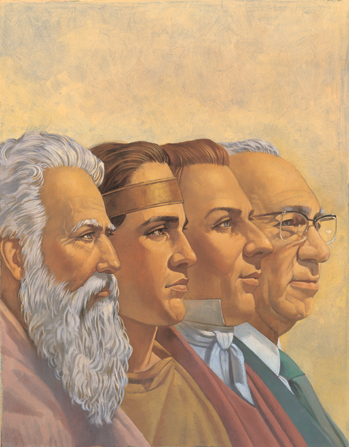 Zenock –  Alma 33:16 contains the only direct quotation of Zenock's words, citing him as one of many Israelite prophets who foretold the mission of the Son of God (Alma 33:14-17; cf. 34:7) and quoting him on the mercies that God grants because of his Son. Alma 2 noted, however, that because the people "would not understand" Zenock's words, they "stoned him to death" (Alma 33:17). Nephi 2 cited Zenock and others who testified of the coming of the Son of God (Hel. 8:20). In the last reference to his work, Mormon wrote that Zenos and Zenock foretold the destruction that preceded the coming of Christ to the remnant of their posterity (3 Ne. 10:16).

Neum – Neum is mentioned only once in the Book of Mormon. In writing to his future readers, Nephi 1 cited him along with other prophets who foretold aspects of the mortal mission of Jesus Christ. According to Neum's words, the God of Abraham, Isaac, and Jacob (Jesus Christ) would be crucified (1 Ne. 19:10). This confirmed what Nephi himself had seen previously in a vision (1 Ne. 11:32-33).