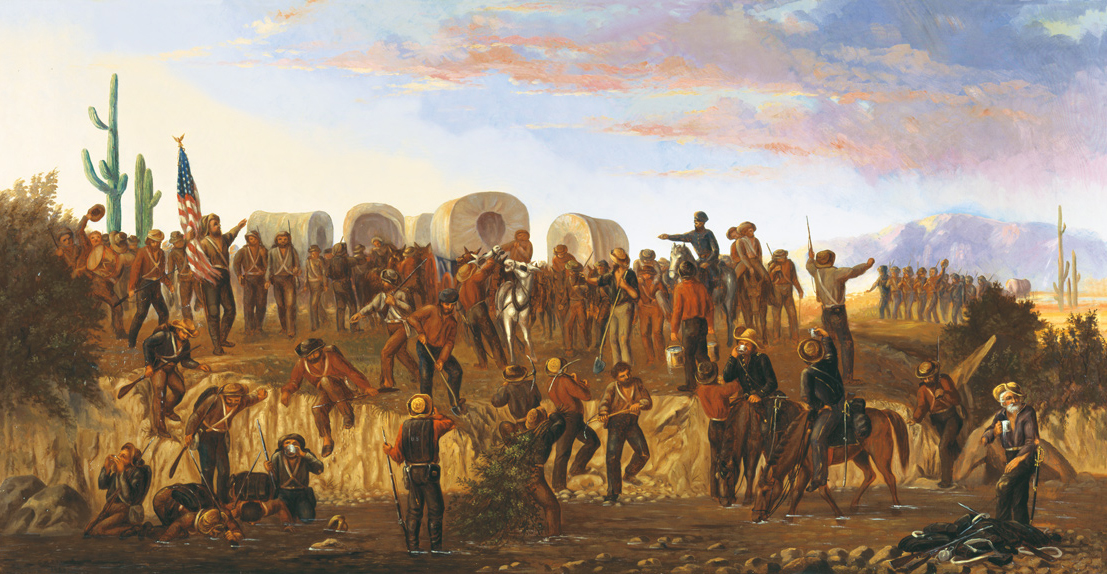 Though it never fought a battle, the Mormon Battalion, a volunteer unit in the 1846 U.S. campaign against Mexico, earned a place in the history of the West. Its men cleared a wagon road from Santa Fe to San Diego and helped secure California as United States territory. Members of the Battalion helped preserve a tenuous peace in southern California before the Treaty of Guadalupe Hidalgo ended hostilities. A wagon road they established between the Gila and the Rio Grande influenced the U.S. government to make the Gadsden Purchase. They also opened wagon roads via Carson and Cajon passes that linked California with Salt Lake City. Some former members of the Battalion eventually participated in the gold discovery and helped stimulate economic development in the Great Basin (see California, Pioneer Settlements in). These former LDS soldiers ultimately received favorable recognition both from their military commanders and from other non-Mormons for their industriousness and loyalty.

After Brigham Young had determined a timetable for moving west from Winter Quarters early in 1846 (see History of the Church: c 1844-1877, Exodus and Early Utah Periods; Westward Migration: Planning and Prophecy), he instructed Jesse C. Little, president of the Eastern States Mission, to seek government assistance. With the help of Thomas L. Kane, Little explored the matter with Amos Kendall, an influential political adviser, and later directly with U.S. President James K. Polk. After making a decision to send an overland army to California under the command of Stephen W. Kearny, Polk confided in his diary on June 2, 1846: "Col. Kearny was also authorized to receive into service as volunteers a few hundred of the Mormons who are now on their way to California, with a view to conciliate them, attach them to our country, & prevent them from taking part against us" (Polk, p. 109).

President Polk authorized this enlistment despite several concerns. One was the danger of internal conflict because Kearny's fighting regiments were mainly Missouri recruits, and Mormons and Missourians had little respect for each other since the Saints had been forced from the state in 1838-1839 (see Missouri Conflict). Polk also wanted to avoid the possibility that Mormon troops could be the first and possibly only American troops to reach California overland in 1846. The President's confidential orders therefore gave Colonel Kearny almost unlimited authority to deal with such matters.

Kearny dispatched Captain James Allen to raise five hundred volunteers from the LDS camps on the Missouri River. The initial reaction to Allen's call was overwhelmingly negative. Some feared that this call was part of a government conspiracy designed to ascertain their strength and to obstruct or prevent their movement west. The five hundred enlistees would be drawn from the able-bodied men most needed for the trek west, and few saw any potential benefit.

However, by early June Brigham Young realized after struggling through the rain-soaked quagmires of southern Iowa, that the Saints could not safely reach the Rocky Mountains that year as planned. The proposed enlistment, he recognized, could bring military pay that would be helpful for purchasing supplies; moreover, it would provide for transporting several hundred families to the West, allay fears about LDS loyalty to the United States, and secure the privilege of establishing temporary quarters on Indian land near the Missouri (see Winter Quarters).

As a result, Church leaders began vigorously recruiting volunteers from council bluffs to Mt. Pisgah. Heber C. Kimball called the enlistment a great blessing from Heaven, and Brigham Young explained that the soldiers would be mustered out in California, much closer to their new home in the West. Official rolls record an enlistment of 497 volunteers. In addition, as many as 80 women and children marched with the battalion, some of the women serving as paid laundresses.

Brigham Young selected LDS officers for the five companies, and the recruits voted to sustain his selection. The death of Colonel Allen en route to Santa Fe led to conflict: Should leadership fall to Captain Jefferson Hunt, senior Latter-day Saint officer, or to Lieutenant Andrew Jackson Smith of the regular army? Smith led the Battalion to Santa Fe, and the problem was solved when Kearny's new appointee, Philip St. George Cooke, took command.

When it became apparent that some soldiers and most of the families lacked the stamina for the desert March to San Diego, three "sick" detachments, including nearly all the women and children, went to Fort Pueblo, Colorado. Pueblo was an ideal location, partly because it was the temporary home of more than forty Latter-day Saints from Mississippi who had proceeded farther west than the general exodus. Altogether about 275 Latter-day Saints spent an unusually mild winter at Fort Pueblo under the command of Mormon Battalion captain James Brown. The next spring they proceeded to the Salt Lake Valley, arriving July 29, 1847, just five days after Brigham Young's party.

Commander Cooke, meantime, prepared the Battalion for the trek to San Diego. After sending the sick detachments to Pueblo, he reorganized the command staff and acquired provisions, including thirty-seven wagons. He left Santa Fe with 397 soldiers. On the Rio Grande River he sent a final sick detachment to Pueblo, leaving the battalion with approximately 340 men, four officers' wives, and only a few children prepared for the grueling desert March.

After a strenuous desert March, the battalion reached the Pima villages scattered along the Gila River. From there it followed the previously established Gila Trail to the Colorado River, forded the Colorado, then struggled from water hole to water hole along the southern edge of the Imperial Sand Dunes and across the Imperial Valley. Finally, it followed the dry Vallecito Wash to the infamous Box Canyon. As the sidewalls of the wash became too narrow for wagons, the men hewed a route through the rock outcroppings and brought the five remaining wagons into southern California.

The Mormon Battalion's only engagement of the war, the Battle of the Bulls, occurred December 11, 1846, when several of the battalion's hunters opened fire on wild cattle that had stampeded into the rear companies. The toll was ten to fifteen bulls killed, two mules gored to death, three men wounded. When the battalion later neared Tucson, Mexican soldiers and residents chose to flee rather than fight.

After reaching San Diego in January 1847, LDS soldiers were given a variety of garrison responsibilities, with fifteen serving as Kearny's escort back to Fort Leavenworth. After more than 300 were discharged in Los Angeles on July 16, 1847, Captain Hunt led about fifty northward to Monterey. Some of the 300 worked near San Francisco before reuniting for the trip to Salt Lake City. The largest group, about 164 men, met Captain James Brown of the Pueblo detachments on the Truckee River in the Sierra Nevada Mountains on September 7, 1847. Brown was en route to collect his men's pay in San Francisco. Brown brought news of the safe arrival of the pioneers in the Salt Lake Valley, along with word that the men were free to work in California or to proceed to Salt Lake City, depending upon their financial circumstances and desire.

While a few went eastward, the majority of the destitute men scattered for odd jobs, including about forty who worked at Sutter's Fort and a few who were at Sutter's Mill when James Marshall discovered gold. Eighty-one men reenlisted as the California Volunteers and performed garrison duty at San Diego. After their discharge in the spring of 1848, these men opened a wagon road via Cajon Pass to Salt Lake City.

Though leaving their families behind was difficult and their desert March arduous, by their sacrifice the men of the Mormon Battalion facilitated the Saints' move to the Salt Lake Valley and helped develop the West.