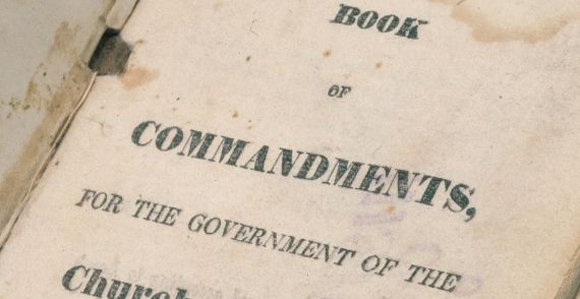 Encyclopedia of Mormonism – Doctrine and Covenants

The Doctrine and Covenants is a compilation of revelations, most of which were received by the Prophet Joseph Smith for the establishment and governance of the kingdom of God in the latter days. It is a standard work of the Church and functions as its open, ever-expanding, ecclesiastical Constitution. Its main focus is to build up the Church of Jesus Christ and to bring people into harmony with Christ's kingdom. It is viewed as the capstone of the Church; its companion volume, the Book of Mormon, is seen as the keystone (Benson, pp. 83-85). The Book of Mormon was written to convince all individuals that Jesus is the Christ (see Book of Mormon: Overview); the Doctrine and Covenants was given to organize and orient them according to God's mind and kingdom.

Of the 138 sections and 2 declarations presently in this collection, 133 were received principally through Joseph Smith, the first prophet and President of the Church. The seven remaining sections were received or written by or under the direction of Oliver Cowdery (sections 102 and 134), John Taylor (section 135), Brigham Young (section 136), Joseph F. Smith (section 138), Wilford Woodruff (Official Declaration 1), and Spencer W. Kimball (Official Declaration 2).

While most passages in the Doctrine and Covenants have a specific historical setting, virtually every verse is one of wisdom, general instruction, religious principle, or doctrine. Most of the revelations were received in answer to specific prayerful requests. Although many were given for the benefit of particular individuals, by and large their guidance has universal application, making these revelations as relevant today as when first received. They were given to the servants of the Lord "in their weakness, after the manner of their language, that they might come to understanding" (1:24). They are recognized by Latter-day Saints as "the will of the Lord,…the mind of the Lord,…the word of the Lord,…the voice of the Lord, and the power of God unto salvation" (68:4).